Graduating during a year rocked by a pandemic and social inequity, UCSF School of Medicine’s class of 2021 is ready to make a difference in their communities and advocate for equality and justice in the health care system. More than one-third of the class of 2021 are from groups that are underrepresented in medicine, 27 percent are the first in their families to earn a college diploma, and they speak more than a dozen languages.

Kelechi Nwachuku, MD, was selected by his fellow graduates to speak at the commencement ceremony. Dr. Nwachuku, whose family hails from Nigeria, and who was brought up in South Central LA, described the brokenness and inequity in the community in which he was raised. “When I was younger, a grade school I was attending was abruptly shut down due to a lack of resources, forcing me to relocate at the drop of a dime.”

Dr. Nwachuku appreciates UCSF’s mindset around progress toward a more equitable environment. “[UCSF is] an environment in which a black medical student doesn't feel the need to carry his medical badge wherever he goes in fear of racial profiling and the police brutality that often results from it,” Dr. Nwachuku said.

He encouraged graduates to use their platforms to give voice to the voiceless, bring hope to the hopeless and shed light on those in dark places. “I want to reach and empower those little children who don’t even dare to dream because all they’ve been met with are nightmares.” 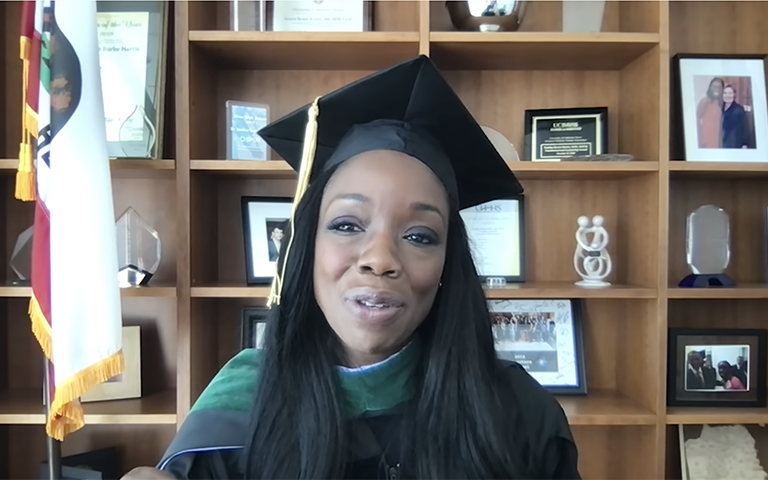 Surgeon General of California Nadine Burke Harris, MD, MPH, FAAP, delivered the keynote address at commencement and discussed how now, more than ever, doctors must dedicate themselves to achieving equity and addressing the underlying drivers of poor health outcomes.

Dr. Burke Harris explained how starting a community clinic in San Francisco’s Bayview Hunter’s Point neighborhood changed the course of her career. One day, she saw a seven-year-old who had a laundry list of problems: asthma, eczema, behavioral concerns and had also stopped growing. “I took a moment to pause and ask another question: Did anything happen around the time that these problems developed?” It turned out that the boy had experienced a significant trauma around the same time his health issues had arisen. She began to notice a pattern among her patients whose parents had experienced substance dependence, mental illness, or who had experienced or witnessed violence or abuse. After diving into the research, she found overwhelming evidence that adversity, particularly during critical periods of development, change childrens’ biology.

“What we now know as ACES, or adverse childhood experiences, lead to the dysregulation of our stress response causing long-term disruptions to brain structure and function, the immune and inflammatory response, metabolism and even the way our DNA is read and transcribed,” Dr. Burke Harris said. “This toxic stress response was a silent killer that was hidden in the well in Bayview and it's in every zip code in every community across our state and our nation.”

As the first surgeon general of California, Dr. Burke Harris led the launch of a first in the national effort to train and reimburse providers to screen for ACES and respond with evidence-based interventions and trauma-informed care to improve health outcomes. The COVID-19 pandemic has made this work even more urgent, Dr. Burke Harris said, since communities of black and brown people have died from COVID-19 at twice the rate of other populations. “This pandemic has laid bare the ways in which our experiences and environments shape our biology,” Dr. Burke Harris said. “We are obligated to not only treat the patients who are infected and sick, but we must also heal the disparate death rates caused by the inequities and injustice that have existed for generations and that translate into significant day-to-day differences in experiences that get embedded in our brains and bodies.”

She encouraged graduates to be confident that they can have an impact and make a difference. “Whether you're bound for the operating room or research lab in an academic medical center like UCSF, or a community clinic in an underserved neighborhood like Bayview Hunters Point, you are ready,” Dr. Burke Harris said. “You are marching forward with your heart and your mind open to the learnings ahead that will help you change the world.”

School of Medicine Dean Talmadge E. King, Jr., MD, noted how the class of 2021 demonstrated their commitment to service during the pandemic by collecting thousands of masks for hospitals in short supply, organizing blood drives, and developing accessible health literacy materials in various languages. “I have confidence that just as you have handled the changes of the last year with grace and understanding, you will embody those same qualities as you embark on this next chapter of your careers,” Dean King said.

Executive Vice Dean and Vice Dean for Education, Catherine R. Lucey, MD, also acknowledged the “great stress test” graduates endured this year due to the pandemic and commended them for rolling up their sleeves to do what was needed.

“You've witnessed firsthand the negative consequences of structural racism in our communities and used your powerful voices to advocate for those to whom no one else has been listening,” Dr. Lucey said.

Apply Now for the Teaching Scholars Program by April 1