Dr. Hasser is Associate Professor of Psychiatry and a Clinical Microsystems Clerkship Coach. After joining the faculty on the Mental Health Service at the SFVA in 2007, she created a mental health treatment program for women veterans that trains numerous multidisciplinary trainees. From 2010-2017, she was Site Director for Residency Training at the SFVA, where she served on the task force to redesign the clinical and didactic curriculum, developed an innovative series of rotations and co-created the women’s mental health Area of Distinction. She received a Departmental Faculty Fellowship in Education Scholarship (2012-2014) and completed the UCSF Teaching Scholars Program in 2016. She was involved with a national task force on entrustable professional activities sponsored by the American Association of Directors of Psychiatry Training. She received the AME Excellence in Teaching Award in 2013, and the Psychiatry Faculty Clinical Teacher of the Year award in 2015 and 2017. Department Vice Chair Dr. John McQuaid observes, “In addition to her educational abilities, Dr. Hasser exemplifies the best characteristics of leadership. She works from a core set of values that are clear and steadfast while being able to meet others where they are and work with them in a compassionate manner.” 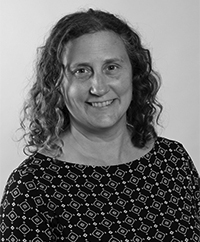